Kindness is a gift anyone can afford

Last night we were at a restaurant here in Florida that we eat at quite a lot. They have All You can Eat wings!  (no we will not be implementing that at the campground! LOL)          George and I are big wing fans. We eat here weekly not just for the wings!

Over the years this restaurant has struggled with staffing issues. When you go in there weekly you can see new staff almost every week and they are always busy. We don’t get too excited about hurry up and eat, so slow service doesn’t really upset us.

As usual when we walked in at 6 p.m. the place was packed. 6 p.m. to close is all you can eat wings – not like most senior specials where they want the Old farts in and out before 4 p.m.! Most of the tables where groups of 8-10 people.  We got our table for 4 and was seated right away and were told “Robbie” would be our waitress but it might take her a few minutes because she was taking care of a table 10.  We said no problem.

When Robbie got to our table to take our drink order we could tell she was visibly shook up. She starts apologizing to us that she has only been a waitress for 2 weeks and this was her first week on the floor by herself.  We told her not to worry she is doing fine. With that she then proceeded to tell us that the table of 10 were being awful to her. She had explained to them at the beginning that she was new but they started on her from the get go.  We could see that she was almost on the verge of tears.  The 4 of us continued to talk to her and reassure her that she was doing fine.

The kitchen was slow getting food out (we found out later they had a fryer go down) but Robbie was keeping us filled with water as we watched this one “lady” in the group return every plate that was brought out to her.  We could hear them asking for the manager. He would go over and they would just blast him. 2 times he went over there. Then the next table of 8 started on the manager (different waitress) and then the next table of 16 started on the manager.  It was like a virus was running through this restaurant. He even sent out 2 orders of fries to the table of 8 and they refused them and told the wait staff to take them back or give them to someone else. Of course none of this was done in a kind tone.

I stopped the manager and told him that Robbie was doing great.  He was rattle and said he had to try and make the “locals” happy because when the snowbirds leave these were the people who came to the restaurant. So these “locals” knew that this was not normal. We also determined it was “full moon”!

We just sat there watching people being horrible to this wait staff/kitchen staff for the slow food coming out (wasn’t their fault – broken fryer), even when they knew why the kitchen was slow.

The table of 10 left and gave the poor girl a $15 tip.  That was it.  How do we know because poor Robbie was again just rattled beyond rattled.

We continued to try and calm Robbie everytime she was at our table.

She then told us if it had not been for us being so KIND to her she would have walked out of the restaurant because of the way those people treated her. We hugged her and told her we would see her next week!

KINDNESS IS A GIFT ANYONE CAN AFFORD 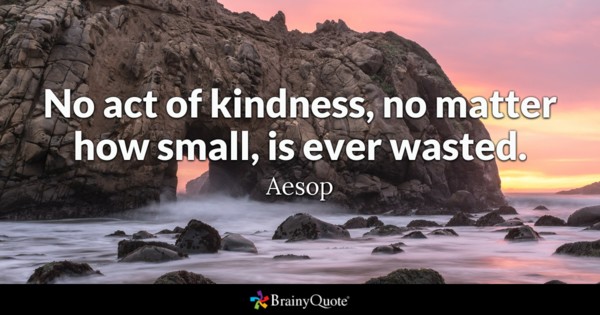 Our business is family owned and operated by George & Amy Smith & Kim & Scott Smith (daughter & son-in-law) The Smith family - and our staff welcome you to come and visit with us while you are in the Mohican and Amish area of Ohio! Stay where you are treated like part of the family.
View all posts by Amy Smith →
This entry was posted in 2018/2019 Winter Travels. Bookmark the permalink.
%d bloggers like this: